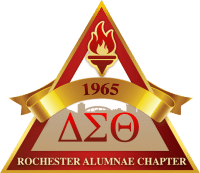 This was the mid-sixties and the City of Rochester was at the time coming out of what was and is known as the second city to make the national news with riots and protests. Rochester was the home of Eastman Kodak, Bausch and Lomb, Rochester Products (Auto parts, etc.), George Eastman, Joseph Wilson (founder of Xerox Corp.), The University of Rochester Medical, and Eastman Dental Schools. It was also only 2-3 years away from a large recruitment of Teachers from the south into a 98% white school system. This added to a gathering middle-class here-to-fore stagnated in Industry employment, and segregated neighborhoods with little flex in becoming integrated. Saul Ailinsky, a community organizer of that era, had come to Rochester at the request of a developing but fragile Black middle-class community leadership.

It is against this backdrop that DELTA women most who had come to Rochester either with their spouses who were integrating the Corporate Culture, or who themselves were beginning teachers recruited for graduate school at SUNY Colleges at Brockport & Geneseo, and Nazareth College where there were partnerships, and the promise of jobs in the mostly all white Rochester City School District.

Dr. Betty Jo Hopkins who migrated from the south to Rochester for graduate school at the University of Rochester, and later rising to the rank of Professor; and the first female Dean of Mathematics & Science at Monroe Community College, spearheaded with 15 other identified Deltas in the area what is known today as THE ROCHESTER ALUMNAE CHAPTER OF DELTA SIGMA THETA SORORITY, INC. She was the chapter’s first president, and an active guiding force until her retirement from Monroe Community College in the late ’90s.

Education and government employment opportunities became careers for most of the early chapter charter members. By the mid ’80s most of the Rochester Alumnae charter members had transferred from Rochester to other cities and chapters, some had retired, a few were deceased.